Why bother to make this utility as the Arduino IDE can do everything?

That’s why I made this utility, simple, straight-forward and trying to have a sleek look, to make myself feel better when proceeding an upload for Arduino.

Arduino Builder is a fully standalone utility for viewing, compiling and uploading Arduino sketch file and compiled ELF or HEX file (usually bootloader) to Arduino board with Arduino serial programming interface, USBasp or Arduino ISP, without the need for Arduino IDE. This can be easily done with no more than 3 steps. When compiling is required (for uploading sketch file), the utility scans the sketch for referenced libraries and build the necessary libraries automatically.

The distribution package contains Arduino 1.0.4 core and library files, AVR GCC compiler toolchain and AVRDUDE. As only the standard Arduino libraries are shipped with the utility, in order to build with custom libraries, please place the library source code files (with identical directory name) in <install dir>/arduino/libraries directory, as what is done with official Arduino IDE.

Only 3 choices are to be made before the compiling and uploading can be proceeded.

During compiling or uploading, the current status will be displayed and the detailed information will be shown in the console area. A detailed tutorial is available here. 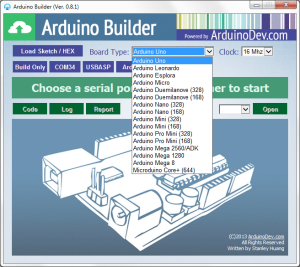 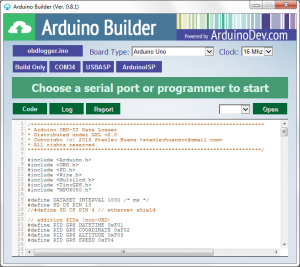 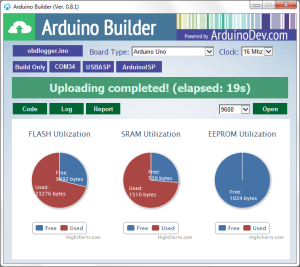 Arduino Uploader is a command line utility invoked by command line options and will return after compiling and uploading proceeded.

Compile and upload Blink.ino to Arduino UNO via COM4: